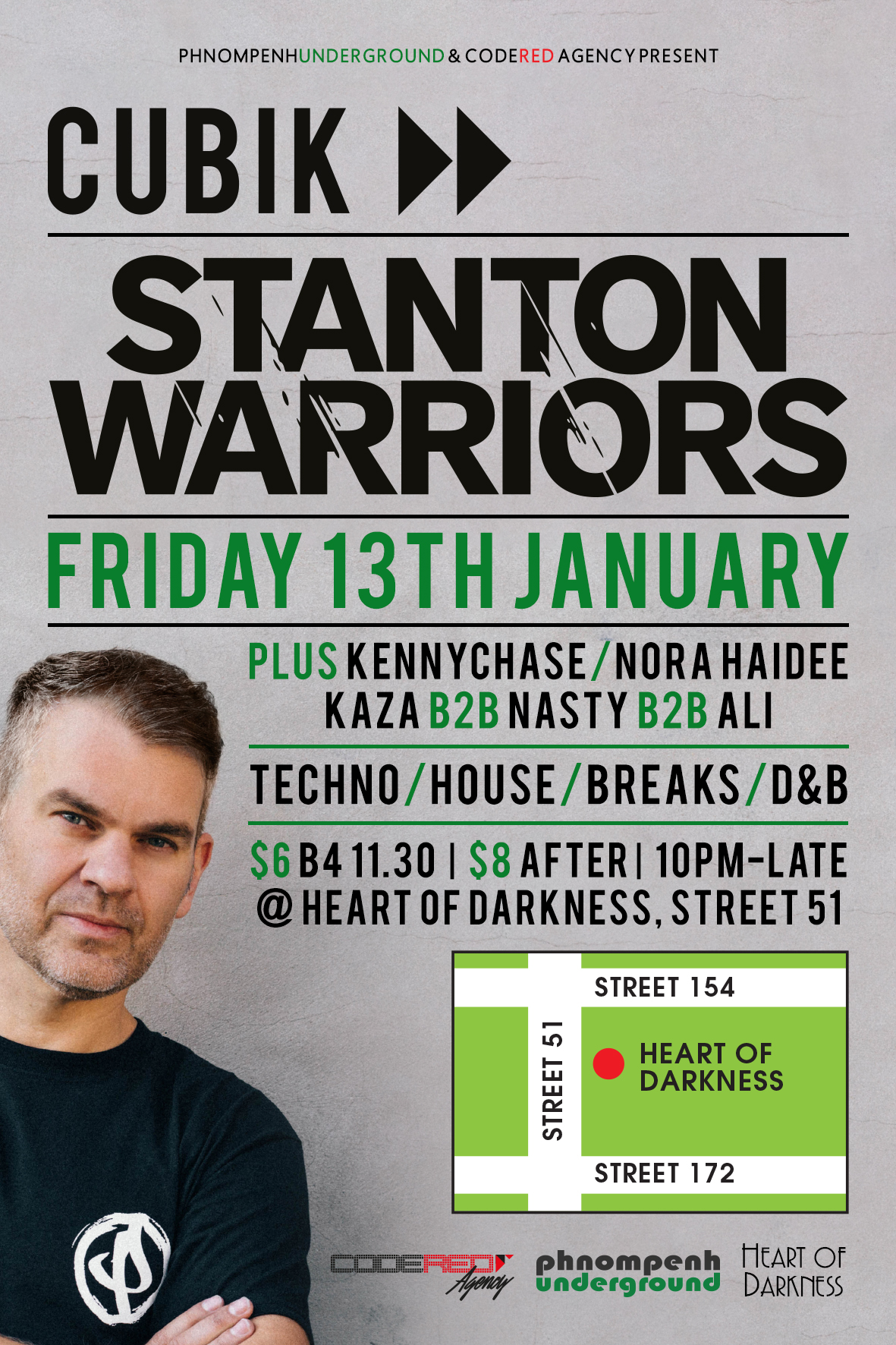 “Their relevance and influence has grown with every year and their Stanton Sessions parties simply reaffirm their position atop the pedestal.” MTV

CUBIK▸▸is starting off 2023 with a bang by bringing an absolutely undisputed legend to Phnom Penh.

As you probably know, it’s so difficult to get true international DJs to come to Cambodia, so we are stoked beyond measure to bring Dom from the mighty Stanton Warriors to the awesome Heart of Darkness for what promises to be a total banger of a night!

Unless you’ve been living under a stone for the past 20 years, you’ll know that, since bursting onto the scene with their multi award-winning compilation “The Stanton Sessions” back in 2001, the Stanton Warriors’ irresistible and inimitable sound has consistently remained the soundtrack to some of the world’s biggest and best parties; from East London warehouses, Miami boat parties and illegal Detroit raves, to the stages of Coachella, Glastonbury, Burning Man and Ultra, selling out global tours and topping DJ lists along the way.

At the end of 2019 the Warriors released their 5th studio album, ‘Rise’ – which went straight into the TOP 5 Dance Album Charts on iTunes in UK, Australia and US, with DATA Transmission saying “This album is their best work to date. Stanton Warriors we salute you.”

To support the Stantons we have an awesome lineup – local legend Mr Kenny Chase will be bringing the booming bass and tribal drums alongside what we like to call the ‘Techno Triplets’ – KAZA, NASTY & ALI, playing back to back (if you caught them at CUBIK▸▸ NYE, you’ll know that these 3 are lethal!) as well as one of our fave DJs – the very lovely Miss Nora Haidee, who brings heart and soul to the dance floor every time she plays.

We’re hosted by the awesome Heart of Darkness – as you’ll know, this is an amazing venue like no other in Phnom Penh and its a return back for CUBIK▸▸ to probably our fave venue in Cambodia!

If you’ve ever been to one of our parties before you can expect music, atmosphere and a party like nowhere else in town… Proper Party Music for Proper Party People.

So come and join us for probably the biggest night in Phnom Penh since the pandemic started – entry is only $6 before 11.30pm and just $8 after with drinks specials all night.

All we ask is you bring yourselves, your dancing shoes and your very good vibes and dance the night away to some of the best music you’ve ever heard!