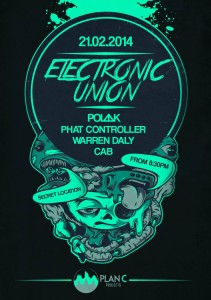 Feel the flow of a collection of sounds busting out from across Europe and Asia. Underground beats in concrete bliss.

From beyond, formed together like a million smiling lizards – the sounds concave a rave like never before – never swept, never more.

Beats, drinks and dancing – With love… Feat – A host of rad European DJs including Polaak, CAB, Warren Daly and The Phatt Controller

In a secret location to be announced!