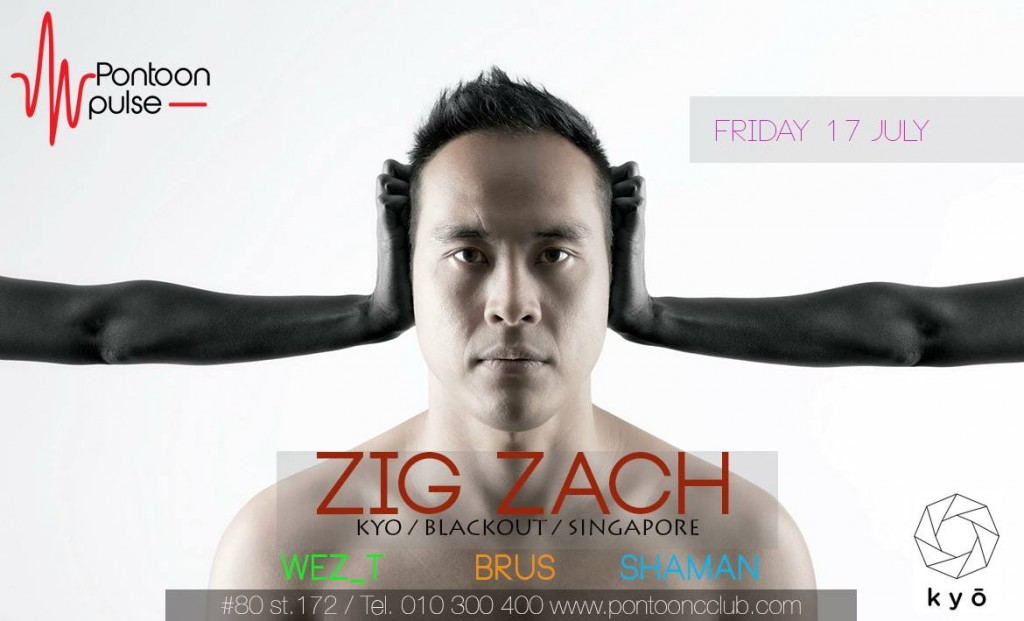 Zig Zach better known for his Muay Thai fighting skills as a contestant on the international hit reality TV series by Mark Burnett, The Contender Asia – A professional Muay Thai fighter by day, a DJ by night.

He first honed his DJ skills in the gym he worked when he was 18. What started as a hobby soon became a passion alongside his training and fighting. He soon started taking his sound outside of the gym and making a name for himself by DJing at the infamous Model house party in the western part of Singapore known as “111” & at the legendary I.P Rooftop parties!

Having ripped through the roof of the house party scene with his smooth sets and thumpin beats. He was soon invited to perform at some of the best venues around the island, playing with some of Singapore’s finest DJs Godwin P, Bredon P, Keishi (Juice 2004 Winner) EJ Missy (Juice 2008) and Artihc (Juice 2009).

NYE 2009 he impressed many with his warm up set for UK Legend Seb Fontaine and US House legend Marshall Jefferson, which lead to bigger gigs with legendery producer/DJ Ashley Casselle a.k.a Ashtrax (Global Underground/Wall Of Sound) and Dale Anderson (Global Underground).

2011 saw him rock the mainstage along side the residents of super club Amnesia Ibiza on their world tour!!!

Zach, known for his versatility in playing chunky progressive,tech-house and minimal with a dash of techno!

Further afield he has entertained the crowds in Volar, Hong Kong and Hush along the Green Mango Street in Koh Samui! Rcently adding the beautiful island of Bali to the lists, playing the super posh restaurant, Metis to the underground club, Maria Magdalena.

Whether he’s playing in the small room or taking on the main room of a club, Zig Zach always rocks a party!!

Zig Zach, a professional fighter to look out for when he’s in the ring and a DJ to check out when he’s behind the decks!