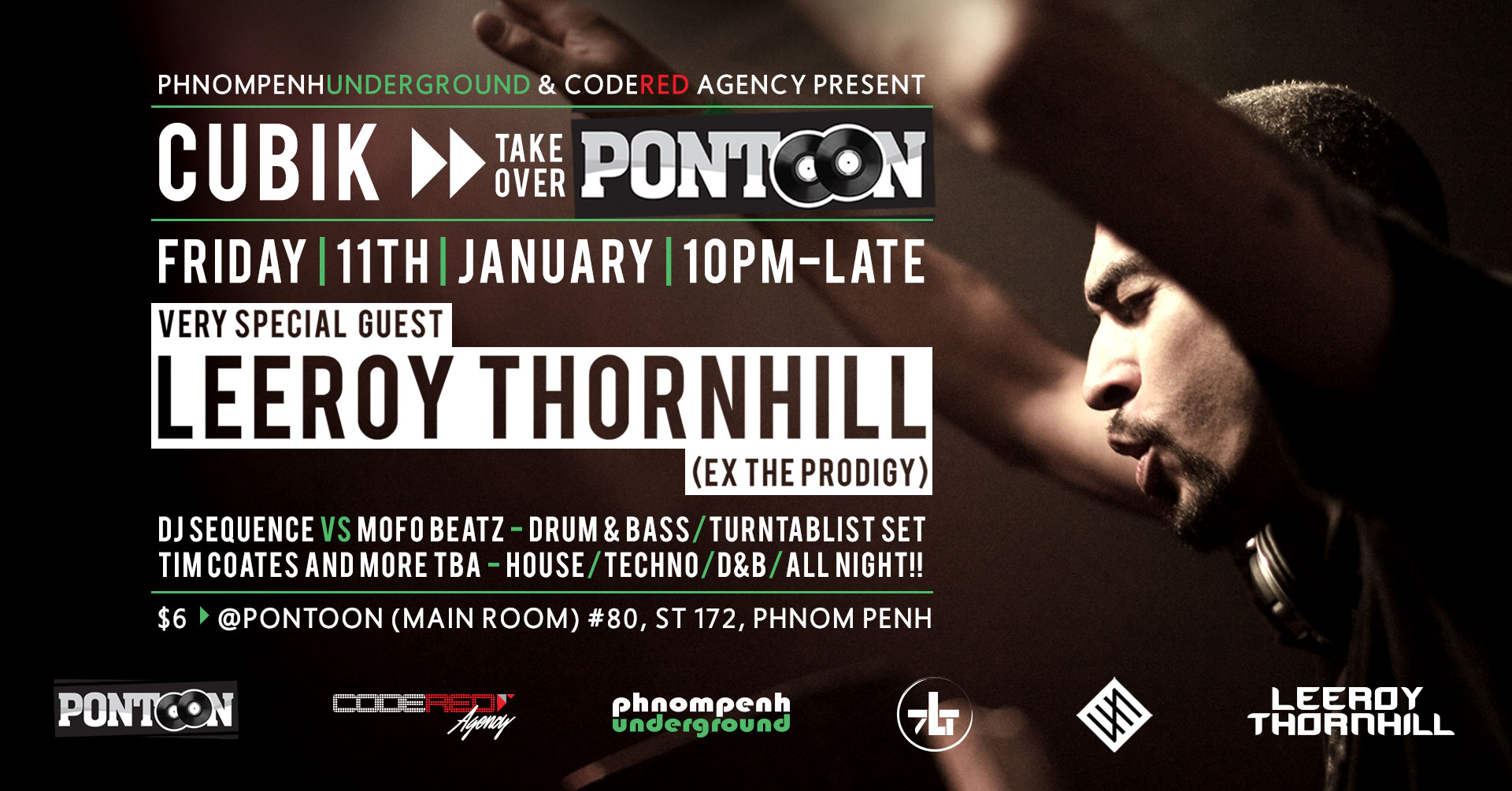 We’ve decided to kick off 2019 in style and, for our biggest and best CUBIK yet, we’re taking over the massive Main Room at Pontoon and bringing you an amazing special guest in the shape of Leeroy Thornhill (ex The Prodigy)

Leeroy absolutely smashed it when he last visited Phnom Penh, with a set that ranked as one of the best in Phnom Penh’s clubbing history and we’re hyped beyond belief that he’ll be playing for us at CUBIK!

As a founding member of The Prodigy – one of the greatest and biggest Dance acts of the last 20 years – Leeroy Thornhill needs no introduction…but we’re going to give him one anyway!

Leeroy spent over 10 years with the Prodigy on their worldwide tours and general hell raising. He picked up his musical style whilst touring and DJing with the Prodigy -­ a mix of old school and new school that’s heavy on the electro edge and full of funk that rocks the dancefloor. Since going solo in 2001, Leeroy has forged an amazing career with his own SMASH HIFI, Hyper and Flightcrank projects, remixing the likes of Darren Emerson, David Gray, Dr Doom, Dub Pistols and playing all over the world including massive festivals like Glastonbury and Epizode.

For his latest project, he’s joined forces with the The Prototypes label, Get Hype Records. Leeroy has just unleashed his latest single, ‘The Calling / Vibrations’, including a Drum & Bass remix from Bladerunner and a House remix from Shades of Rhythm.

Supporting Leeroy, we’ve got an amazing array of some of the best DJ talent in Phnom Penh with a very special Drum&Bass/Turntablist set from DJ Sequence (Phnom Penh Underground) vs Dj Mofo – Kreative Kingz, plus the awesome Tim Coates (Nudism) and more DJs to be announced.

We’ll be transforming Pontoon with mindblowing visuals and lighting, a banging sound system and the best vibes in the city. If you’ve ever been to one of our parties you’ll know to expect music, atmosphere and a party like nowhere else in town. Proper Party Music for Proper Party People!

Our amazing face-painter Pidor Ham and her crew will also be in attendance to make you look even better (if such a thing were possible!)

So come and join us for CUBIK – entry is just $6 with drinks specials (TBA) all night – all we ask is you bring yourselves, your dancing shoes and dance the night away to some of the best music you’ll ever hear!