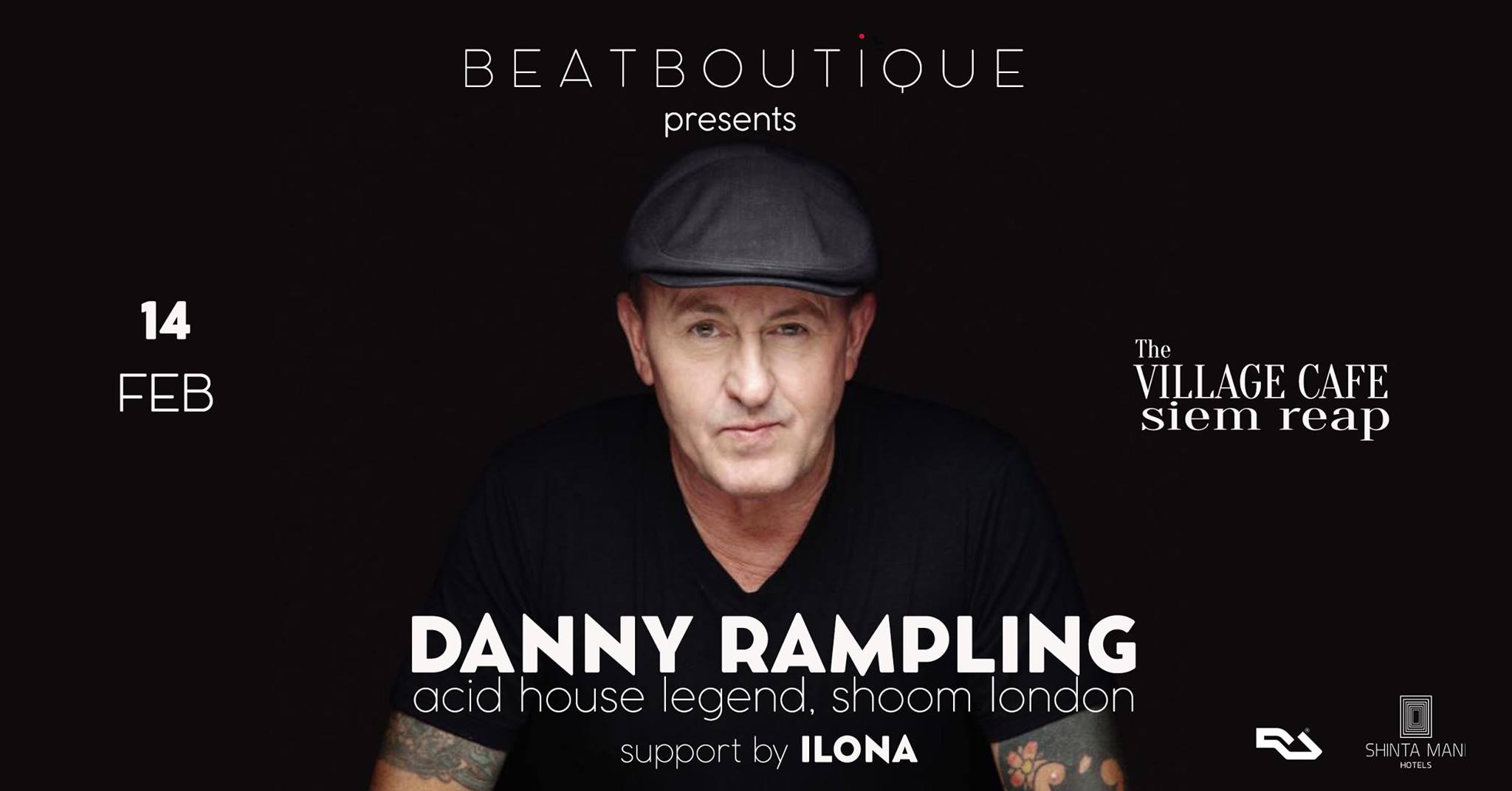 BeatBoutique Asia is proud to presents DANNY RAMPLING at The Village Cafe on 14th February 2020!!!
Supported by ILONA RAMPLING his wife, Sakura & the Beatboutique crew xx

DANNY RAMPLING:
DJ, producer and UK electronic music phenomenon Danny Rampling was one of the original ‘Superstar DJs’ and remains a true pioneer and visionary of the global dance scene. Through his legendary 80s acid house club SHOOM and renowned radio shows on BBC Radio 1 and Kiss FM, Danny played a pivotal role in the development of the UK dance music scene.
In an impressive career that spans several decades, Danny Rampling has sold over a million compilation records, picked up several awards (including the No. 1 spot on DJ Mag’s famed Top 100 poll) and held legendary DJ residences at storied clubs such as Ibiza such as Pacha, Amnesia, and Privilege. The DJ is regularly featured on TV documentaries for National Geographic, the BBC, MTV and many others thanks to his unrivalled music knowledge and expertise. As such, he really is a household name, and it is fair to say without his invaluable contribution, the musical landscape of the White Isle (and back home in the UK) would be very different.
In addition to his music career, Rampling is the author of the best-selling book ‘Everything You Need To Know About DJing & Success’ and runs his own music consultancy firm. The DJ is still producing compilations under the name Rampling Digital. Danny also DJs alongside Iona Rampling as ‘Mr + Mrs Rampling’, playing at high-profile events and celebrity private parties around the world.
2017 saw Rampling appointed as a consultant and key member of the Mayor of London’s music committee, and invited to feature in the Sky TV documentary ‘The Agony & the Ecstasy’. Spanning 30 years, this eye-opening three-part series explores the history of dance music and rave culture in the UK. In 2018 he was asked to contribute to a new production, penned by Trainspotting author Irvine Welsh, and re-telling the legend of the birth of acid house and rave. Danny Rampling will be acting as music consultant for the production. He is also contributing to a new film written by award-winning screenwriter Irvine Wels Dean Cavanagh, working title ‘Rave’, loosely based around influential DJs Nicky Holloway, Paul Oakenfold and Danny Rampling. The production will chronicle the beginnings of the rave movement, from the trio’s fateful Ibiza trip in 1987 to the second ‘summers of love’ in 88-89.
In December 2017 Rampling’s pioneering club night Shoom celebrated their 30th anniversary with a monumental event at London’s Pulse club. Shoom returned to Paradiso for a sold out fantastic New Year’s celebration in 2018, and will be taken to clubs around the world throughout 2019.

ILONA:
ILONA is an American born, UK based, Techno Dj + Music Producer. ILONA’s debut E.P. “Keeping
Me Awake’’ reached #41 in the Beatport Techno top 100, and #11 in the Hype Techno Charts in June
2019, and her hit Acid Techno remix of Klaus Blatter’s ‘Space Girl’ on Rob Da Bank’s record label
Sunday Best Records, and has quickly made waves in the Techno scene.