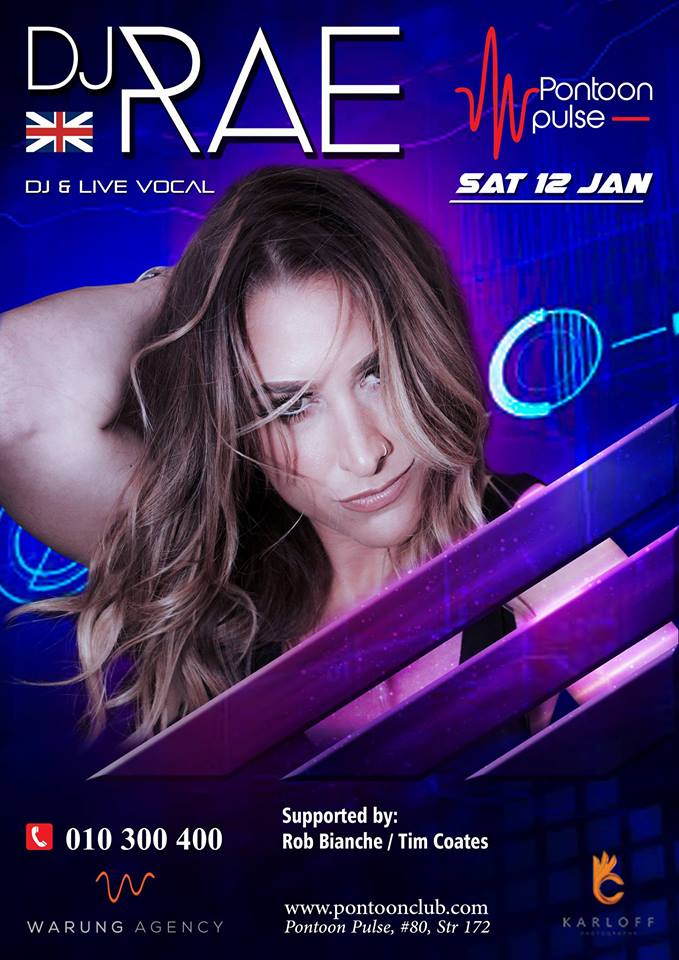 DJ Rae proves to be one of the few females in the house music scene with such a dynamic career, carving out her unique path as DJ, Singer, Songwriter and Producer. Starting her career with Defected records, the first self penned release ‘Can’t Stop’ with Kings of Tomorrow became a house anthem, and Rae’s multifaceted talent lead to her fast becoming an artist in demand. Many confident productions followed, landing her an MTV #1 dance chart position & a UK top 20 hit. She has gone on to compile and mix the prestigious Defected in the house compilation and headline global tours and festivals, such as Ministry of sound, Pacha, Together, and held summer and winter Ibiza residencies at Pacha, Ushuaia & Lio. With many consecutive years at Amsterdam dance event and the Miami winter music conference with Defected, Undr the radar and Pacha, establishing herself as a respected artist with house music’s most influential names, playing alongside Roger Sanchez, Todd Terry, Kevin Saunderson, Erick Morillo and MK, Rae continues to champion the way for females in the dance world. From running her own label and representing at this years Brighton music conference, to a full UK tour with the Hacienda Classical, Rae is one of the most prominent female artists in the game, and is only set to grow in stature around the world as a modern voice in the global house conversation.

A striking artist and an undeniably skilled DJ, who has worked from her roots of vinyl with a passion for selection and mixing, Rae has developed her craft with unique vocal performance which has become her USP which few can rival. Her dedication and passion for making music means when not touring Rae is rarely out of the studio, delivering a stream of clubland anthems which stand the test of time such as ‘Hide U’ alongside Sandy Rivera and the huge Top 20 release ‘Take Me Away’ with DJ S.K.T.

Rae’s definitive sound resonates through the genres, her voice has a unique quality that can transport you to the beginnings of house music, and yet remains fresh and relevant throughout the times. Her sharp production style is in the same way reminiscent, fuelled by influences from the early New York and Chicago house scenes.

With solo productions and collaborations Rae has released on many of the biggest dance labels like Toolroom, Spinnin and Armada, also majors Sony, Atlantic and Columbia with chart success across the dance charts and the UK official charts. Her recent productions continue to build momentum with fresh collaborations ‘Reachin’ with Lupe Fuentes on In The Loop; The ‘Good Times’ EP with Deepshakerz on Toolroom; ‘Get me down’ with ATFC & Duane Harden on Armada; “You & me” with Ryan Blythe & Scrufizzer on New State ”Sundown/Loving me” with KC lights On Nothing else matters/Sony, “Make me better” with Marc Vedo on Milk & Sugar, “Feel my love” With Jack Wins on AFTR HRS.

The launch of Rae’s own label, Rated marks another exciting chapter in her career. The first single “My soul” set the benchmark for great things to come, to follow came “Surrender” and ’Crazy’ with a Radio 1 premiere from Mister Jam and support from tastemakers across the scene. “Watch you” by Kamereon marks the fourth label release, premiered on Deep house Amsterdam and Deep house London.

Signed to Ultra music publishing, Rae is a sought after topline writer for many of the industries top producers, often in session with major recording artists and also featuring herself as a collaborative artist.

Whilst running her own label and studio; Hosting a monthly podcast-This is Rated, Producing, Collaborating and Song writing, Rae is also guest vocalist with the hugely successful Hacienda Classical tour, which has seen her take on such iconic stages as The Royal Albert Hall and on The Pyramid Stage at Glastonbury Festival, cementing Rae’s status as a unique artist to be reckoned with.