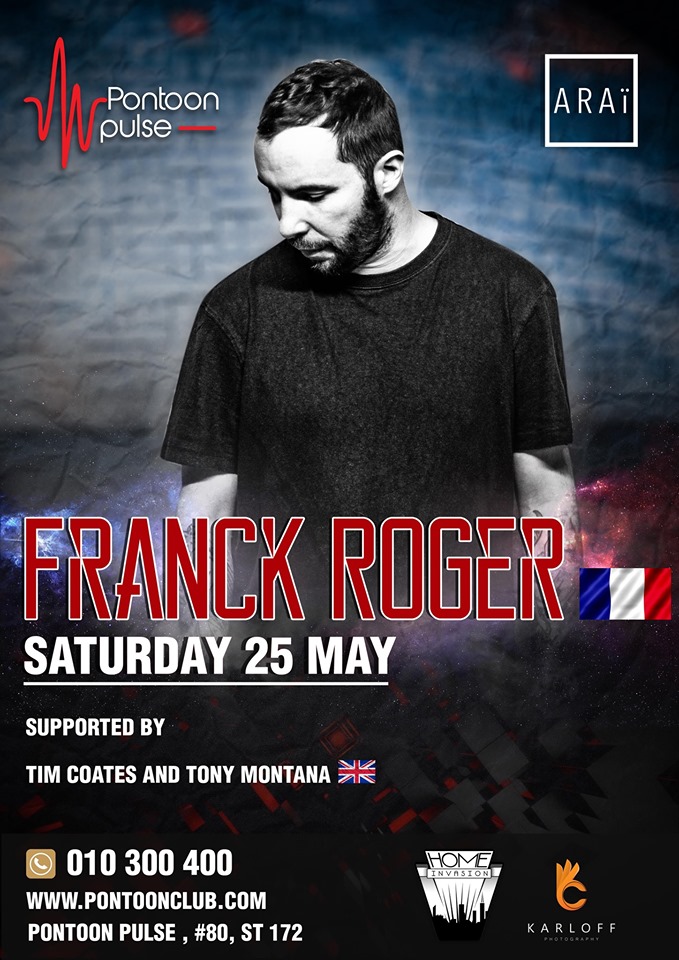 With a career stretching back to the late 90s, Franck Roger is an artist whose dedication to his
craft has established him as one of the leading lights in Paris. As both a DJ and Producer he has
proven himself to be a remarkable talent, remaining relevant and contemporary regardless of the
latest trends. His music has a timeless quality, acquired from staying true to the roots of house
music. As head of one of the most influential French labels, Real Tone, he helped to nurture new
talent and supported many of the nation’s best- known artists. With such an impressive list of
achievements you could forgive Franck for becoming complacent although, to the contrary, he is
currently taking a new direction by reinventing himself.
Franck Roger started out as a DJ in 1997, and began making his own music soon after in 1999.
Like many, he grew up on a diet of great music thanks to his parents; from Motown and disco to
reggae. He would record his favorite songs from the radio onto cassettes and ‘edit’ them by hand.
Most inspirational was a radio show broadcast on Radio FG called “A Deep Groove Radio Show”
hosted by legendary Frenchies DJ Gregory, DJ Deep and Alex from Tokyo. Franck recorded every
show, writing down the track list and using it to go record shopping. This formed the foundation
of his entire career, and his ethos today remains staunchly dedicated to maintaining the values of
those early days.
By the age of 19 Franck had his very first studio, a humble set up comprised an AKAI 2000
sampler, a midi keyboard and an ATARI computer. He began by sampling from his turntables and
mixer, learning everything by himself with no outside help. This formed another core element of
Franck’s style – sampling, something which is still an intrinsic part of his production process
today.
Inspired by local hero DJ Deep, as well as US pioneers like Kerri Chandler and Jovonn, Franck
began to immerse himself in the world of production, while also becoming a regular face on the
Paris club circuit.
By 2004 he’d gained worldwide recognition with his track ‘No More Believe’ made with M’Selem
(featuring Chris Wonder), the same year he set up Real Tone with Lionel Marciano. Initially a home
for the increasing surplus of his own music, it evolved to become a platform for many younger
artists, including Maya Jane Coles, Dyed Soundorom, The Martinez Brothers, Paolo Rocco and M
A N I K.
In the 10 years since then Franck has gained a reputation for representing only the very best in
house music, in a variety of forms. From vocal hits like ‘After All’ with Mandel Turner to deep,
tribal cuts such as ‘Egotrippin’ on Desolat.
His most recent project, Home Invasion has a simple concept and harks back to a time before
information technology dominated society. Before the internet, when music lovers would peruse
the shelves of their favorite record shops to discover priceless gems, to chat with other music
enthusiasts and spend time appreciating music in the real world. Home Invasion represents a raw,
analogue sound with a distinctly human touch.
It’s a label, artist name and the concept behind a series of parties taking place in Franck’s
hometown, Paris. It’s a new lease of life for an artist who has constantly strived to be the best he
can possibly be, a master of his craft and a loyal student of the roots of house music. Franck has
dedicated his life to music and in doing so has achieved a level of quality that is unsurpassed.
Home Invasion is the next exciting step in a career of a man who remains one of the most
influential figures in France and on the global stage. Stay tuned…