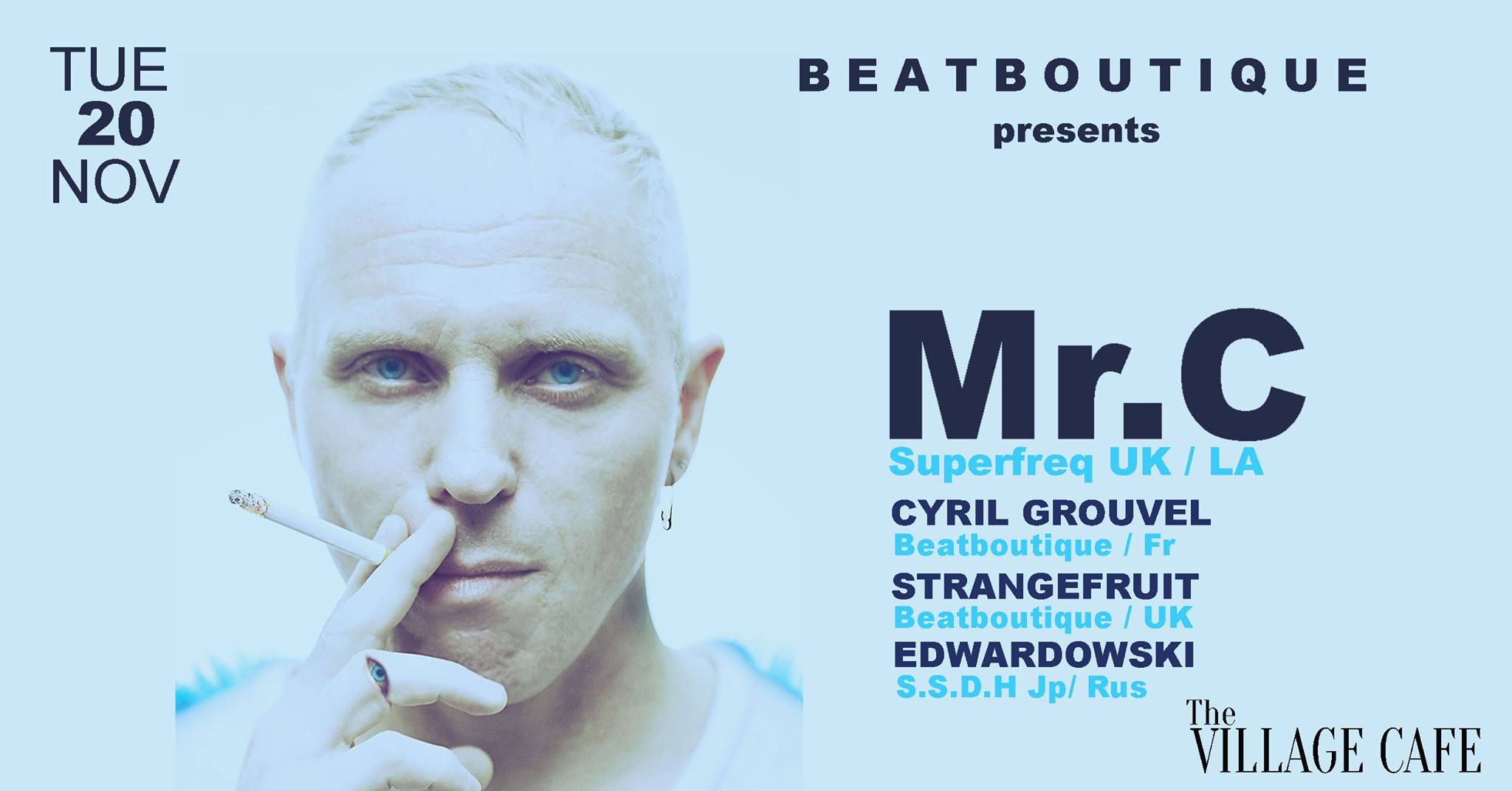 BeatBoutique Asia is proud to receive for the 2nd time in Siem Reap the iconic Mr.C / Superfreq @ The Village Cafe

Richard West aka Mr.C was born in London in the late 60’s. He started MCing in London clubs aged 16 & soon earned a reputation as a fast talking vivacious rapper working with LWR radio’s Ron Tom, Jasper the Vinyl Junkie & Jazzy M. Mr.C then hooked up with Colin Faver & Evil Eddie Richards to became a resident rapper at the legendary Camden Palace in London

Mr.C held down a weekly radio show called Future Music with Kiss 100FM in London from 1993-2002 & has presented TV shows for MTV, FH1, VIVA & BBC. To say that Mr.C is one of the most iconic DJs in the world would be an understatement.

In December 1995 Mr.C opened the legendary nightclub The End in London with Partner Layo Paskin of Layo & Bushwacka! fame & then AKA bar 3 years later, which celebrated its 13th anniversary in December 2008 & was lauded as one of the best night clubs in the world, which completely changed the face of clubbing in London & beyond. Sadly The End & AKA closed its doors for good on January 24th 2009. 1 Chapter closes & another begins.

Mr.C is founder & owner of Plink Plonk records, co-founder of End Recordings & founder & co-owner of the Superfreq label, which is now releasing music prolifically.
Mr.C has recorded under the names, Myster-E, Unity 2, Nu Jacks, Bass Bureau, The Shamen, Mantrac, Somnambulist, Animus Amour, Killer Loop, Mr.C & Tom Parris, Mr.C & 16B, Sycophant Slags, Indigo Kidz & East LA Tek.
Mr.C is best known as front man, songwriter & producer of the pop group The Shamen with whom he notched up a string of top 10 hits including Move Any Mountain, Love Sex Intelligence, Boss Drum, Phorever People & the UK number 1 smash hit Ebeneezer Goode. These hits were hits the world over. The Shamen album Boss Drum went double platinum in the UK & they also won a highly coveted Ivor Novelo for Songwriters of the year UK in 1993. Richard’s currently recording solo as Mr.C & is also doing collaborations as the Indigo Kidz with Affie Yusuf & with Noel Jackson as East LA Tek & has recent releases on Poker Flat, Get Physical Records & Adjunct Audio as well as his own Superfreq imprint.

Mr.C has just finished his brand new album entitled Incidents, which is due for releases on vinyl & CD on his Superfreq imprint on 13th March 2017 with singles from the album due on 13th February, 24th April & 29th May, all containing big name cutting edge remixes. Mr.C has his “Stand Up” track taken from the Incidents album out now on the Save Fabric compilation album. His new Soulfuric track has just been released on Alola & has his new Liquid Acid track has just been released on DJ Pierre’s “Acid 88” album on Afro Acid. He also has a remix of Dinnarie & Bissen on Good For You records being released in January & a remix of Banco De Gaia coming out in February, which will all lead up to his album release nicely.