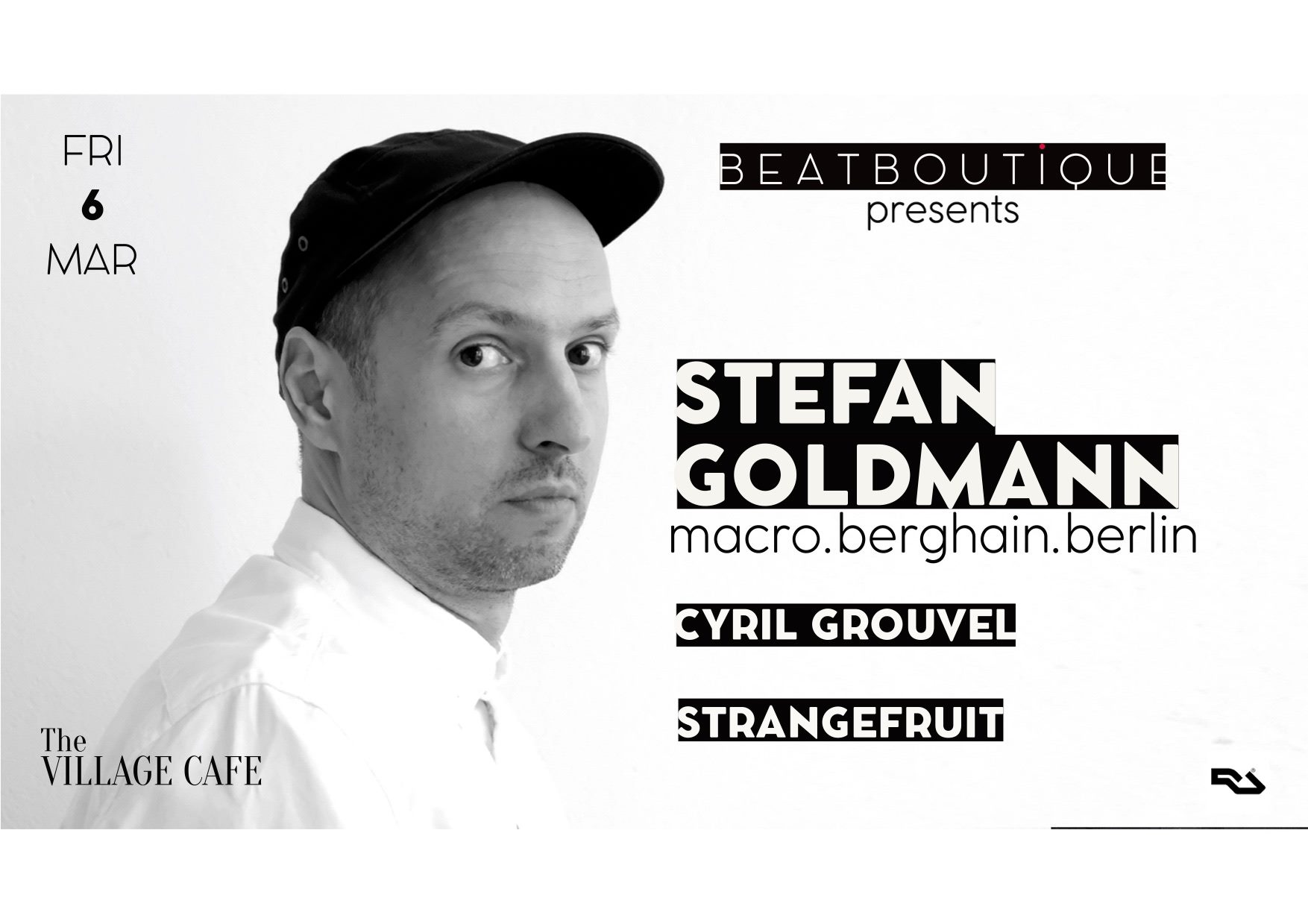 Friday 6th March BeatBoutique Asia is honoured to host again one of the best Dj/Producer from the Underground scene at The Village Cafe , Stefan Goldmann resident of the legendary Berghain / Panorama Bar and co-founder of the label Macro.

Stefan Goldmann:
Techno has always been about imagining the future and experiencing the excitement of change and discovery. If anybody has lived up to this aspiration in recent years, it must be Stefan Goldmann. With every release and project he has brought a new edge to the table, creating some extraordinarily memorable works along the way. Many of his tracks have served as genre-shifting blueprints for countless DJs and producers – from his early reductionist works for the Classic and Perlon labels to Sleepy Hollow, Lunatic Fringe or The Maze. With dozens of projects he has taken an evolutionary approach, introducing variants to core features of techno – from shifting meters to new tuning systems to re-imaginations of the very technology that generates and stores the music. Extending the range of techno has also become the criterion of Macro, the label Stefan Goldmann operates with Finn Johannsen. It has become a platform for cutting edge releases by the likes of KUF, Elektro Guzzi, Patrick Cowley, KiNK and Vladimir Dubyshkin.

Stefan Goldmann is DJing at clubs across Europe, Asia, the Americas and Australia and at festivals such as Mutek, SXSW, Time Warp and his own f(t) festival in Berlin. In addition he has branched out into a wide array of projects, maintaining an approach that remains essentially techno: investigating grid rhythm, sampling, vinyl culture or digitisation down to their cores. Commissioned works and special format performances range from intimate solo encounters at iconic venues such as Kyoto’s Honen-in Temple, Los Angeles’s LACMA museum or CCK in Buenos Aires to large-scale compositions for music theatre, film, ensembles or dance.

A special relationship has formed between Stefan Goldmann and Berlin’s Berghain club since 2006. He conceived the Elektroakustischer Salon nights, opening up the club to experimental formats, writes a regular column for its program flyer, plays all three rooms of the venue and is a co-author of Berghain’s book, ‘Art In The Club’. His own book ‘Presets’ was published in 2015 and investigates automation and industry aesthetics in digital music. While probing the boundaries of art and science, this techno renaissance man still feels most at home between two decks, communicating with the crowd through the beats he creates and mixes.

Another big night ahead @ The Village Cafe Siem Reap 8)