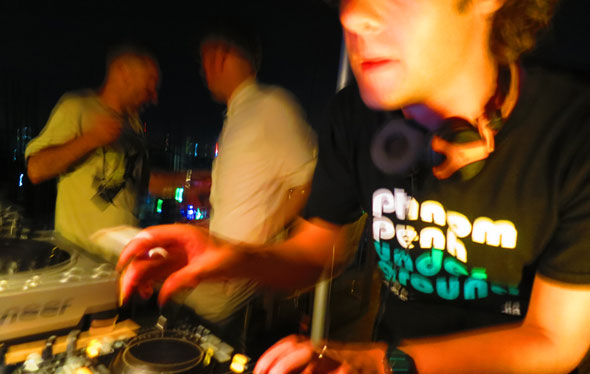 Hopefully, an awesome showcase of some of the best of Phnom Penh’s DJs! We’ve got 9 of our favourites to play and they’ll be spinning a feast of musical styles – from Techno to DnB, from House to HipHop and all points in between.

The night starts at 9pm and goes on till god knows when. There will be 2 for 1 drinks from 9-11pm and a prize draw for the first 100 thru the door with loads of giveaways, so get there early! 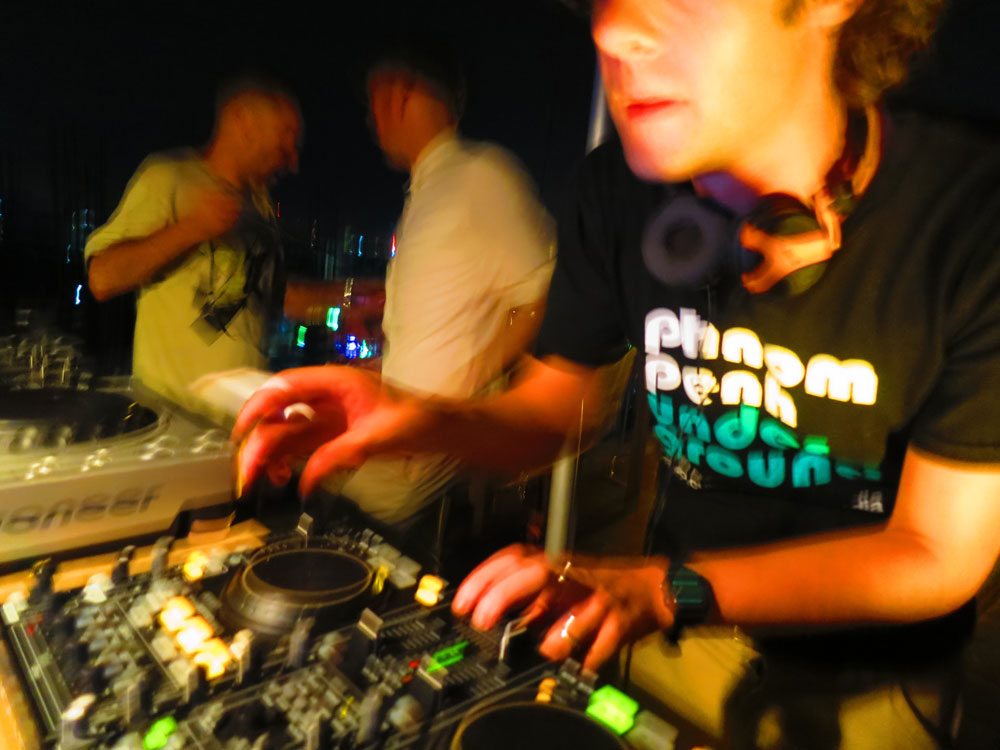 Tell us about your background

Born in the UK, lived in Hong Kong as a kid and led a fairly conventional life until somebody took me to a night called “Vision” at the Paradise Club in Islington, London.

Like a lot of people of my generation, experiencing the Rave/Hardcore scene of the early 1990s opened my eyes in so many ways – firstly to this amazing music which was like nothing I’d ever heard before and secondly to the social revolution that occurred – it didn’t matter if you were black or white, rich or poor – everyone was under one roof listening and dancing to the same music. I can’t emphasise enough what an important turning point that was in my life!

I was privileged to experience legendary nights like Metalheadz at the Blue Note (see picture below) and Innovation at the Camden Palace and those nights have really shaped me into who I am today. 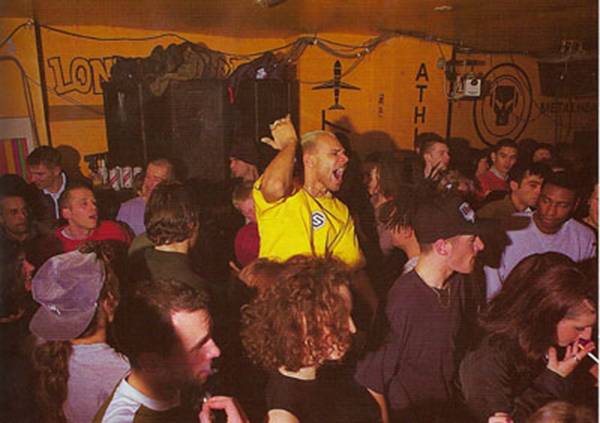 As Hardcore transformed into Jungle and then Drum and Bass, I was inspired to get more involved by DJing and subsequently promoting my own nights, mostly at the infamous 333 club in Hoxton.

Fast forward to 2011 and me and my girlfriend were starting to get sick of the greyness, bad weather and cost of London. We’d been to Cambodia a few times on holiday, so we took a gamble and moved here…

After a year of living here, we realised that there no clubs playing the music we wanted to hear – underground DnB, so we started promoting our own little night at the MetaHouse called Bass Session. Through that we met Tonle Dub and Java Tech and worked together with them on a night called Berlin Tropical, which was a big success, running initially at the ShowBox as well as a legendary boat party.

What inspired you to set up Phnom Penh Underground?

We were back in the UK for the summer of 2013 and I was feeling really inspired by some of the little underground nights that were starting to spring up at the MetaHouse and other venues.

I was just playing round with some fonts and the name Phnom Penh Underground came into my head. I designed a logo and thought why not make a website that can catalogue and hopefully promote all the energy that is around in Phnom Penh at the moment. The rest is history!

What do you think you have achieved with the website?

I think we’ve made a really good resource and focal point for the scene in Cambodia. I’ve met so many visitors to the country who have typed in “Phnom Penh Clubs” into google and have found the site and through it some of the awesome nights we have in PP and Cambodia.

We’ve probably listed 4-500 events in the last year. We’ve got over 50 mixes on our soundcloud page and have had over 6000 listens to them – not bad for one of the smallest clubbing scenes around. We’ve had interviews with DJ Craze, Bert Bevans, Krafty Kuts amongst others. We’ve got over 30 Cambodia DJs profiled. Our FaceBook page has almost 2000 likes.

The most important thing though is we’ve helped to nurture and grow the scene here and connect dance music lovers with each other.

The site costs us a lot of money and (more importantly) a lot of time but I think it’s worth it – I hope people appreciate that we don’t make any money from the site – it really is a labour of love. We’ve had the odd person sniping away at us, saying that we are getting rich off the scene but sadly that’s not true! 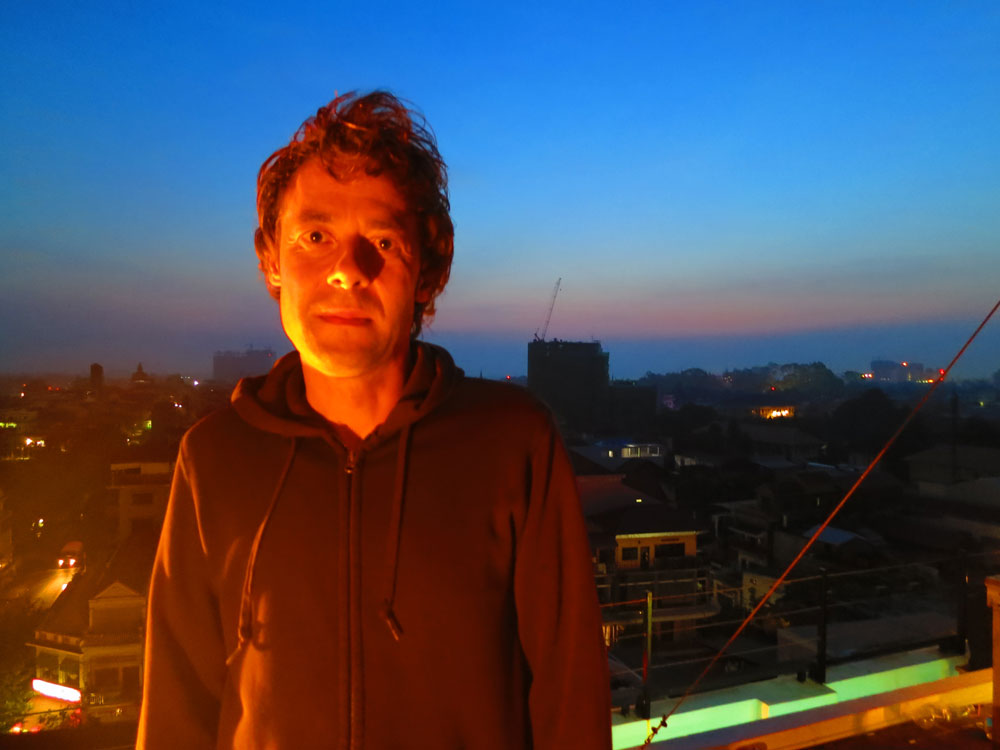 What do you think of the sate of the scene in Cambodia at the moment?

Sadly the “underground” is still in the minority – that is people playing good music they love, rather than crap to make a fast buck.

If people took a chance on music like DnB, then I think they might be surprised with how the crowd react…instead a lot of people try and play it safe with really commercial house.

However there are loads of good nights happening – at Code Red, at the MetaHouse, at Dusk till Dawn and Pontoon Pulse as well as some very talented DJs around, so I am sure the scene will keep growing in the right way.

What can be done to involve Khmer people more in the scene?

When we started Phnom Penh Underground last year, one of our main aims was to get the Khmer youth involved in the underground dance scene. This has certainly happened to an extent – especially in nights like our own HighRise and the ShowBox organised nights amongst others – but not, as yet, to the extent that we’d hoped for.

There are several reasons for this. Firstly there are cultural barriers – nightclubs are perceived to be the preserve of foreigners and rich Khmers, not as a place for normal Khmer kids. Secondly, there are the basic economic reasons – $1.50 for a beer might not seem a lot to a foreigner, but it’s a vast amount to the average Khmer.

But, in fairness to the mission statement of Phnom Penh Underground, I think we now realise that this is a long term project – not something that will only take a year

Its also important to stress its not just up to us at Phnom Penh Underground to make this happen – everyone involved in the scene needs to get involved and continue the excellent work that is done by so many in the underground community.

Moving on, next year, we’re going to be a lot more proactive and start running initiatives with some of the big players in the underground scene that will bring Khmer kids in as DJs. We believe that this is the key to building up a local following – once the kids see their friends are playing the music, they will follow.

We have so much admiration for what people like Yab Moung and Rom Bak have done in bringing together foreigners and locals through music and it’s clear to us that this is the way to go to build up a truly healthy and vibrant scene.

Without wishing to sound too idealistic, music and especially (in our view) dance music can be such an amazing tool to bring seemingly different cultures together.

From a personal perspective, I remember the early days of Rave in the 90s and how it brought together so many people (myself included) from different cultures who would have never known each other otherwise.

If we can bring together people from different backgrounds – Expats, Khmers, Tourists – together, dancing under than one roof then I think we’ll have really achieved something. Cambodia is in a unique political and societal situation at the moment and the potential to build something big is certainly there.

People say that Phnom Penh is going to be the next Bangkok/KL/Singapore in clubbing terms, but all those places have got strong local involvement and we need to get that to progress to the next level. 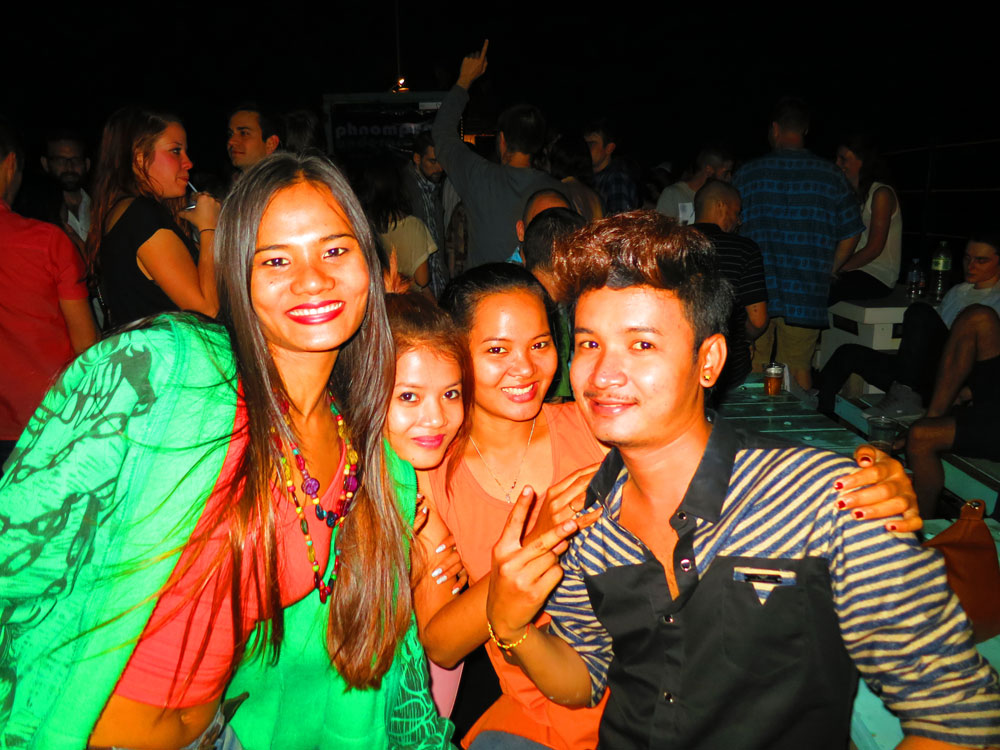 Lastly, if you had to pick a memorable moment from the last year, what would it be?

Hard question! Its been a good year – 2 moments that stand out were our awesome High Rise NYE party that was totally rammed, also playing at the Full Moon Party on Koh Rong Saloem and having the crowd chant the melody of the tune I was playing for 3 minutes after the electricity went down was pretty special as well!

Hopefully Saturday night will be another one to add to the memory album!