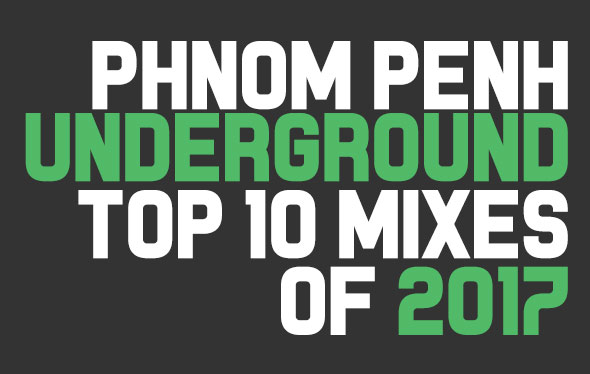 Its that time of the year when we have a look at the stats on our Soundcloud account and list our annual top 10 mixes of the year.

We’re purely going on number of listens as reported to us by Soundcloud from the start of 2017 – so any 2016 or earlier plays dont count.

Of course, we have some fantastic mixes that aren’t on the chart and you check them all out on our Soundcloud page!

So without futher ado, lets go for it in ascending order (not the classic Top of the Pops style for those who remember, but what the hell)

1.Sushi Firas – Touching the Void
Our most popular mix of the year was delivered by The irrepressible Mr Sushi (as we like to call him) who banged out an awesome mix earlier this year. No idea how to define it – maybe SuperFreakTechno – but it gets the crowds jumping and the fists pumping and thats what matters!

2.DJ Shagzy – Styles Series Volume One – Liquid
In like a bullet at number 2 in our chart was the man with the best hair in Phnom Penh, DJ Shagzy proved his mastery of DnB with a beautiful mix. concentrating on some truly uplifting and funky styles, mixed 100% on vinyl. We loved this mix!

3.DJ Sequence – UB Radio December 2016
Sneaking in from the end of of last year, our own DJ Sequence keeps the DnB theme strong with a whistlestop tour thru DnB past, present and future.

4.DJ Sequence – Live @Club Love Part1
We’ve lost Club Love as a venue for the music we love as they’ve descended into a mainstream/commercial direction, but this set of Bassline House bangers from DJ Sequence reminds of the great times we had there. Onwards, ever upwards!

5. Lorenzacio Clap – Miss my D-Prez in the disco (vinyl only)
God we miss the Cambo Disco Club guys! It was a massive loss to the Phnom Penh scene when they departed for pastures new at the start of 2017. One half of the team, Lorenzacio has made this beautiful mix – recorded solely on vinyl – as a poem of fraternal love for his Cambo Disco Club brother”

6.DJ Sequence – UB Radio May 2017
Another DnB mix in the top 10? We guess people do like DnB after all! Dedicated to the memory of Marcus Intalex this was a tour de force from the PPUG leader

7.Lorenzacio Clap – Cambo Disco Reminiscence
Better known as one half of the reknowned Cambo Disco Club, Lorenzacio Clap strikes out with a solo mix…and its awesome!
Suffused throughout with a melancholy yet uplifting vibe, the spirit of the original masters from Detroit and Chicago is always apparent.

8. DJ Sequence – Live @Club Love Part2
It may be goodbye and good riddance to Club Love, but lets remember the good times before the souless robots got involved. House. Bassline and Garage all mixed up into a style that represents some of the funkiest shit known to mankind!

9.Nora Haidee – DarkSide
One of our favourite people in PP, the superb Miss Haidee mixes pulsating Motor City rythms and hypnotic, uplifting loops will take you on a true journey to the DarkSide….and all the way out to the light beyond…totally reccomended!

10. Nick E – Heart Beatz Volume 1
Last but very much not least, this mix from MetaHouse supremo Nick E has notched up over 350 plays since its release last week and is only number 10 by dint of being our latest  mix. It’s a perfect slice of Berlin Techno – dark, debauched and full of that all inportant Maschinenfunk flavour!

So there we go – another year of superb mixes, with over 14,000 people listening over the year to mixes from our little Cambodia scene.

Lets look forward to bigger and better thing next year and please, keep on supporting us and the Cambodia Underground scene!

You can check all our mixes out at https://soundcloud.com/phnom-penh-underground or via this handy listening device below.