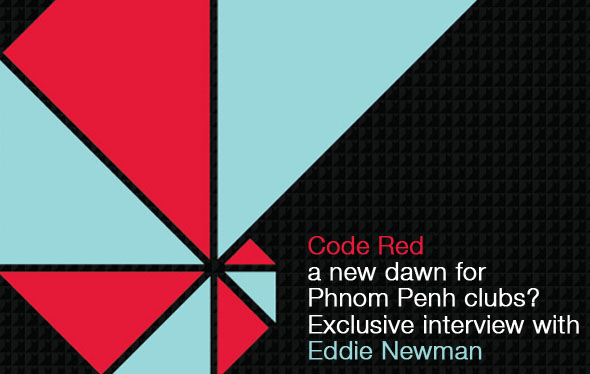 Few events in the Phnom Penh clubscene have been more highly anticipated than the opening of Code Red nightclub. After the aborted opening of the original Code last summer, head honcho Eddie Newman is ready to go with a purpose built space next to Koh Pich bridge. 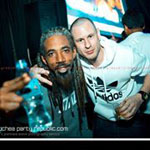 In advance of the opening on Thursday the 16th of January (more details here), Phnom Penh Underground spoke to him exclusively about his extensive background on the cutting edge of Phnom Penh’s clubscene – from running a bar at the lakeside to his split with Pontoon –  before moving onto a discussion about Code Red specifically.

What’s your background in Cambodia?

I’m from Glasgow originally – I promoted a few nights and managed a couple of bars there. I first visited Cambodia in 2004 – I actually got stuck here with no money!

Eventually I got some money through and moved here permanently in 2006. I purchased a small bar for $3000 in the lakeside. At that time there were only 2 or 3 bars there. For the first couple of years, I had an incredible time but after a while, it got tedious – backpackers constantly asking you the same questions.

So how did you move into club management?

I was actually looking for an apartment and a friend of mine, Nathan Horton who was one of the original photographers here, suggested the place he was living in – which was on a boat by a pontoon, next to the night market. So I went down on a Friday night to the Pontoon, which was being run as a club. The place was empty – no thought had gone into the DJs or the music. So I said to the owner “Listen, I can make this place work”.

Back then, the original Pontoon had 4 shareholders and my proposal was that if I put in $1000 of my own money, the other shareholders must match it. They agreed to it. So now we had $5000 to play with. So I tarted it up a bit, sorted out the sound, changed the lighting etc. 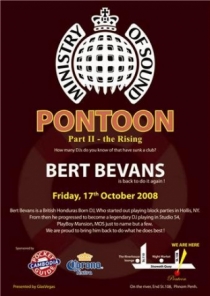 We then booked one of the original Studio 54 (legendary 70s New York club) DJs, Bert Bevans. For our opening night, we used the Ministry of Sound  logo, we used the Studio 54 logo – you can do these things in Cambodia!

By 11.30pm on the first night, the whole club was underwater – we’d actually sunk the club! There were 16 tanks keeping the pontoon afloat and one of them had a hole in it. Luckily no-one was injured. It was the best publicity we could have had. We made it onto the news in Jakarta!

On the other side, 3 of the 4 shareholders were seriously pissed off – but one of the shareholders could see the potential and bought out the other 3. 3 months later, with help from the local Cham fishermen, we raised the club from the depths and re-opened with Bert Bevans.

In October 2008, however, we got asked to move from the present location because of a festival for 3 months. However, when it was time to come back, they wouldn’t let us move back! The authorities were renovating the Riverside and didn’t want a scruffy pontoon spoiling the view.

So, after a 3 month hiatus, we moved to Koh Pich (Diamond Island). We cut up the pontoon into sections and towed it there by tug. We were actually the first ever business there. We had 9 fantastic months with the appearance of Major Lazer being a highlight. Weekends were busy, everything was going well – and then we got closed again. No reason given.

So what was your next move?

We needed a permanent location and finally found the site where Pontoon is now, on St 172. We opened in January 2011. At first it was great, but after a while, because of the location and the crowds, I began to feel that the spirit of the original Pontoon wasn’t there. Instead of being an underground club, it started getting commercial.

For me, it’s not about making money when we get a big DJ in. It’s about marketing, having a good time and putting Phnom Penh on the map – because of us, any big DJ that comes to SE Asia wants to come to Cambodia. 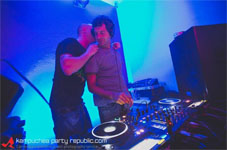 Just before I’d parted ways with Pontoon in October 2012, we booked Layo and BushWacka. I told them about the situation with Pontoon and they said “we’ll follow you wherever you want us to play”. So, I spoke to Johannes at MetaHouse (Phnom Penh underground venue) and he agreed to host it.

We had 4 days to organise it and, to be honest, it was probably the best night I’d ever done. No pressure, no hassle, just pure enjoyment.

So you’ve split with the Pontoon crew – what happened next?

After I parted ways with Pontoon, I did the BigWig Festival in Singapore. The concept was to bring international music to Singapore.

We brought people like Pharoahe Monch and The Pharcyde  – loads of great names. It was a huge success, despite the plethora of rules and regulations’, which came as a shock after Cambodia!

After deciding on the Code concept for Phnom Penh, what happened with the original Code?

We secured a property on the riverside (Mao’s club) and were all due to open it up as Code in June 2013. 2 days before the opening date, the Police said “no”. We still don’t know what the true reason is but hopefully we can open it in the future as more of a bar/bistro vibe.

After the disappointment of the original Code, Eddie decided to focus on a purpose built venue at the far end of the Riverside, near to Koh Pich bridge. With less than a week to go till opening night on the 16th of January, things are starting to take shape and the space looks like it will be very impressive. In particular, the massive DJ booth, a third of the way into the club provides an amazing focus that reminded me of the booth at London’s seminal The End (R.I.P)

What does Code Red bring to the Phnom Penh club scene?

The idea is to have a club that is bringing in major international acts at least once a month. I can’t think of anybody that’s doing that in Phnom Penh at the moment.

What will the weekly programme be?

It depends on the night. You’re never going to hear commercial music here. On the off nights, yes, we will be playing more mainstream stuff – but never commercial. On Tuesdays, we’ll have an industry night with local DJS. Friday nights, you’ll get more of an educated sound – be it Electro, Drum and Bass, real Hip-Hop – we’ve got Leroy from The Prodigy at the end of the month. We’ve got DJ Woody (Ninja Tune) on Valentines Day, The Cuban Brothers on the 21st of February. Expect a big name every month!

Will you be supporting local DJs?

I want to welcome everybody – for example on the first Friday, we’re going to have Dr WahWah, Bojan from Kimchi Collective. I’m open to any DJs in Phnom Penh that are doing good stuff – I’ll give them a shot.

What capacity is Code Red? What equipment will you have for the DJs?

I’d say roughly 400 – the way that we’ve designed it is to be cosy and get an atmosphere. DJ-wise, we’ve got Technics 1200s, Pioneer CDJ2000s, Pioneer Nexus mixers and a brilliant soundsystem with real JBL speakers – not the Kampuchea Krom knockoffs!

What do you see as your customer base? Expats, Khmers or transitory backpackers?

I would say the first 2. I want to make clubbing in Phnom Penh as it is in any other country. I want people to make an effort to come to Code. I want people to plan to come here, get excited and bring that to the club.

At the weekend I expect there to be 2 waves of movement. First, at say 11-1 the Khmer people will come in. Then there’s a transition period of 12.30-1.30, the Cambodian people start leaving and the Foreigners start coming in. It’s just a different culture. In the end, I anticipate a 50/50 mix

In the past the 2 cultures, haven’t mixed together on the dancefloor – Khmers haven’t grown up with the music as we have. You go to a Khmer nightclub and its either local music or Chinese techno. Hopefully we can bring the 2 cultures together a bit.

There will be more of a guide – we’re not going to be too strict. What we don’t want is girls in Angry Bird T-Shirts and guys in jasmine pants and Singha tops! It’s a guideline. For entrance, it depends on the night – we’ll be charging anything from $6 to $15 for bigger acts.

What do you think of the current scene in Phnom Penh? In a recent AsiaLife article, you said Phnom Penh will have the biggest underground scene in SE Asia in 5 years

I think it’s incredible – If you look at the scene in  Bangkok or Malaysia, it’s terrible. We shit on the scene in those places. There’s a feeling here – you’ve got people like Phnom Penh Underground, Kimchi Collective, Dancin’ Mantis, all the reggae music crews, that re changing the scene here ridiculously fast.

In the last 18 months things have progressed massively. I can see that Phnom Penh can be a focal point for music in SE Asia in the next 3-5 years – how Bangkok was 10 years ago.

Doing business and setting up a venue in Cambodia – what have been your experiences?

We’ve  learnt a hell of a lot and made a lot of good contacts over the last 6 months – you’re always going to face Cambodia specific issues here and we’ve certainly made some mistakes over the last year – trying to open the original Code in a residential area with no parking was one of them, but its not been too bad. As regards corruption and bribes, we actually offered money but no-one would take it!